I promised and here it is.

A few months ago I was doing a web search for induction beer brewing to see if anything had changed in the technology. After going through many search results I came across a websites blog entry about sous vide cooking and beer brewing. It was on a website belonging to Oliso. Oliso has been a manufacture of speciality irons for clothing and quilting. They recently delved into induction sous vide cooking. Now sous vide cooking requires accurate temperature control of a water bath for extended periods of time…hmm sounds a little like brewing. I started reading the blog entry and it was written by an Oliso staff member that was a home brewer and it detailed his one gallon batch brew day using the Oliso SmartHub and Top. I was intrigued and looked at the details about the SmartHub and Top induction sous vide cooker. Impressive, time and temperature control. Temperature control in one degree increments! It is based on a 120 volt 1800W induction hob so useable anywhere.

I quickly shot off an email to the company with questions about the appliance and explained my interest, background and advocacy in small batch brewing. The great folks at Oliso quickly emailed me back with answers and questions of their own about small batch brewing. A few email exchanges and we setup a phone call to discuss more. I was as excited about their interest in brewing with the SmartHub as they were. The culture at Oliso has been and is that of making products that are what their customers want and the SmartHub is the result of that. How many companies want to know what you want as opposed to those that like to tell you what you need. Well the people at Oliso offered to send me a unit to use, brew with and send them feedback. As you followers of my blog know I am not a big product reviewer/endorser but this was pretty exciting. They wanted my honest opinion about it for brewing. That was fair, they already had a great sous vide cooking system with great reviews.

What is the Oliso SmartHub + Top? Well the SmartHub is a 120 volt 1500 watt induction cooktop/hob. It has a large glass induction heating surface, touch controls and quiet cooling fan. It, in itself, is a quality induction hob but it’s the Top that sets it worlds apart from other induction hobs. The “Top” is an induction compatible stainless 12 quart sous vide vessel with glass lid and an internal temperature sensor. Yep, when sitting on top of the SmartHub it measures the temperature of the contents of the vessel. The “Top” comes with a sous vide bag rack which also keeps your brew bag off the bottom of the vessel. On the front is a series of LED lights to indicate heating.

Some folks are mashing there small batch brews with sous vide “sticks” and having good luck but there is the cleaning concerns, bags and grain getting sucked into the circulator pumps etc and then you still have to boil on the stove. The Oliso SmartHub doesn’t have a circulator pump and it does just fine without one and it adds to the simplicity of the product and to the BIAB process.

It was time to test it and brew! I needed a BIAB bag so I ran to the hardware store to get a couple 5 gallon paint strainers. In a pinch they worked and with a little coaxing the elastic top of the strainer bag fit snuggly around the Oliso. There are several better brewing bag options out there but the paint strainer bags were quick to find and worked fine.

I did a simple single malt single hop beer with a grain bill of around 4 pounds for 1.25 gallon batch size. I started with tap water at 56 degrees and set the Oliso SmartHub to 154 degrees. It was very quiet during operation and took only 25 minutes to bring the strike water to 154 degrees. I mashed in and the temp dropped only 3 degrees so the unit quickly recovered to the set temperature. For the hour mash I stirred the mash every 15 minutes and checked the mash temp with a dial thermometer I knew to be accurate. Pleasantly surprised to see the temperature was spot on each time. During the hour long mash the Oliso only cycled heat on approximately six times with lid off. The heating cycle while in sous vide mode (enters that mode automatically when the Top is placed on the unit) is gentle pulsed on/off similar to a PID controlled heating element. When the mash was done, used timer to remind me, I pulled the bag of grains out and gave it a good squeeze to get as much of the liquid out as possible.

Next was boil time. The SmartHub restricts the max temp to 194 degrees in sous vide mode by design but it is easy to get around this by carefully lifting the Top up at the front and slipping a piece of paper under the front edge. This interrupts the electrical contacts of the Top and the SmartHub now thinks there is just a normal kettle on top. Right to full power mode to get to boil. It took approximately 20 minutes to reach a good rolling boil. I did heat with lid on to speed up the process and removed it when it started boiling. I was able to turn power down to about 80% and still maintained a nice boil for the hour. Hops for this recipe where added at 30 minutes into the boil (again used the timer feature to remind me). At the end of the boil it was time to cool. One could cover it and let sit to cool but I had a small 12.5 foot compact copper immersion chiller from Coldbreak Brewing that fit perfectly. I had it left over from stove top brewing. After the wort was cool I simply used a mini auto siphon to siphon the wort into my bucket fermenter. I hit my original gravity number and a little over 1.3 gallons into the fermenter. Brew day done in 3 hours including clean up. Cleaning was a piece of cake, a little dish soap and sponge and the SmartHub Top was clean.

I was impressed and using the SmartHub with the Top was easy and intuitive. After the brew day was done I sat down and went over my brew day observations and there were only two things I missed with the Oliso SmartHub and Top compared to my electric brew kettle. That was a drain, I’m spoiled having a drain valve on my kettle. Since it isn’t specifically designed for brewing I understand the drain omission and it really isn’t a big deal in my opinion. The second was a way to support the grain over the vessel to drain instead of holding it and/or squeezing. I emailed Oliso with my observations and suggestions and they immediately replied “we have a perforated steamer insert pan” that could support the grain bag to drain! I got one in the mail and on my next brew I used it and it was great. I just placed it on top of the sous vide Top and sat the grain bag in it to drain as I began heating it to boiling. It could be used to gently sparge the grains a little if you wanted to get a little more efficiency. Oh yeah you can use it for what it was made for and steam veggies or shellfish.

After the second brew day I put a couple steaks in ziplock bags and cooked them to perfection while working on this post. Used a fry pan on the SmartHub to add a little sear to the steaks and they turned out incredible and complemented the first beer made on the Oliso. If you haven’t tried the sous vide cooking process I highly recommend it! There are details and recipes all over the internet. Later, after getting the steamer insert, I steamed up some Pacific NW mussels and enjoyed them with the scotch ale I made with the Oliso…wow what a great pairing!

Check out the video from one of the brew days on my YouTube channel Small Space Brewer   Be sure and subscribe to my channel to get updated when I post new videos.

What do I think? Well I was given the Oliso for testing and evaluation purposes but the company wanted me to express my honest opinion. That being said I have to say, after several brew days with the Oliso SmartHub, temperature control for all-grain brewing is here and just so happens to be in a format that is perfect for small 1 to 1-1/2 gallon batches. You could even brew a 2 gallon batch of a lower gravity beer. For brewing it is almost a “right out of the box brewing appliance”, only a few things are needed that you may already have such as a bag, small wort chiller and auto siphon. The Oliso SmartHub has a small footprint so fits on any kitchen countertop. 120 volt design makes it usable anywhere including in an RV. Serves multiple purposes which is important for brewing in small spaces like my 270 square foot tiny apartment. I simply do not have have room for multiple appliances. The Oliso SmartHub gives me an induction cooktop for boiling, frying, searing, simmering, steaming, sous vide cooking and now brewing beer. It is priced at $499.99 which might seem a little high but I can attest to the quality and customer service. One also has to keep in mind that for $499.99 you are not getting an appliance with only one purpose, it replaces multiple appliances so it is a good deal. Just a sous vide heater stick will run you $100 or more. Currently on their website they are offering 20% off with a posted discount code. Check it out at www.oliso.com

Will I get rid of my electric brew kettle? Probably not as I made it specifically for my brewing style and the small space I brew in. I really like the Oliso and it’s versatility and it is definitely a very good solution for small batch brewers that also enjoy cooking. It’s also ideal for those of us with limited kitchen space. Would I buy one? Absolutely for the all the reasons above and I have been enjoying this one.

Oh yeah, I almost forgot the most important thing…the beer turned out great, simple and tasty.

Stay tuned as there may be more exciting news related to this.

Inside of the sous vide Top 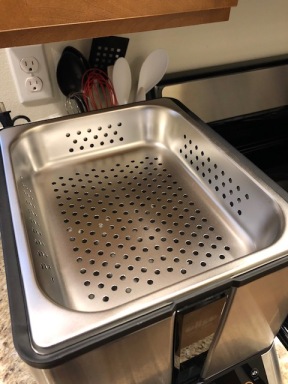 Looking to get a custom mesh basket for brewing?

Support for this blog is always appreciated